Today I will tell you about the last sailmaker in my Joynes family, Oliver Joynes, son of Daniel and grandson of Leonard Joynes/Joines.  Oliver Norris Joynes was born in Baltimore in January, 1834, according to his military records.  “Ollie,” as he was known, was the oldest son of Daniel and Sarah Foos Joynes.

On 22 July 1856, Ollie married Miss Mary Jane Hutchinson, daughter of John and Elizabeth Porter Hutchinson.  (Not much is known about Mary Jane or her parents…another one of my brick walls!) Together, Ollie and Mary had 7 children, 6 which lived to adulthood.  They were James Washington (Jimmy), Charles Henry (Charlie),  William Oliver (Ollie), Ellen Virginia (died in infancy), Mary Jane (Jennie), Sarah Elizabeth (Sadie) and Florence May.  The family lived in East Baltimore where Ollie was a sailmaker like his father and grandfather.  He, too, turned to awning making for a living, as ships with billowy sails were becoming of thing of the past.

Ollie served his country as a private in the 9th Maryland Infantry Regiment during the Civil War.  He and his brothers fought for the Union, although Maryland was a divided state.

The city of Baltimore resembled many progressive Northern cities while the remainder of the state was more agricultural.   Although tobacco was becoming less profitable by the Civil War and the number of enslaved African Americans was decreasing by the beginning of the Civil War, the plantation culture still defined Southern and Eastern Maryland. [Source: Maryland Historical Society, A State Divided.]

After the war, and not unlike his father or grandfather, Ollie tried to persuade the government to grant him a disability pension in 1869.  His disability, you ask?  Well, in his first attempt to receive a pension, he claimed he hurt his left testicle in an accident he had while home on furlough.  His account stated, “My injury was, at first, a cut, but now remains as big as a goose egg.  Having been granted a furlough, I went home.  Upon my return on a freight train, I fell in between the cars and was injured, as above stated, by the breaker attached to the side of the car.  This injury occurred on the 25th of April, 1862, near Abbott’s Roll Mill on Canton Ave., in the city of Baltimore.”  OUCH!!  I wonder what he would think if he knew his 3rd great-granddaughter would be reading about this incident over 140 years later! 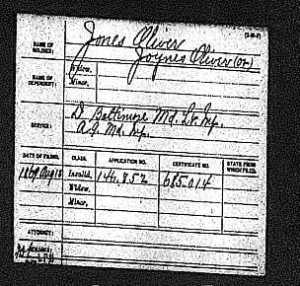 Well, Ollie went on to state that he was a sailmaker and now considered himself 3/5 disabled.  He didn’t win his case…

Not one to give up, Ollie applied for a pension again in 1883.  This time he stated that he became deaf while on duty during the War due to exposure.  He seemed so deaf that the justice who took Ollie’s deposition in his case wrote, “This is the deafest man that I have ever undertaken to question for information.”  Funny, we never heard it passed down through the family that he was deaf.  As a matter of fact, it was said that in later years,  he would get into heated arguments about the War with his son-in-law’s Confederate father.  I don’t know how an utterly deaf person could do that, do you?  But, hey, who knows??  Well, back to the story.  So, yes, Ollie won his case and received monthly benefits from $15-$24 until he died in 1912.