Geneabloggers prompt for today is “Sympathy Saturday,” where you can post about any aspect of the passing of a person. This is an ongoing series by Anne Kruszka at GeneNotes and Generational. So, today I am sharing with you from my cousin’s blog, Philanthropy Writing. Elaine is a wonderful writer and has given me permission to share this with you. You’re sure to feel Elaine’s emotion in this story as you read along. 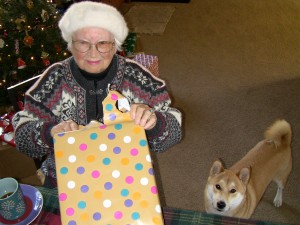 In Memory Of Halina…and the Shadow Side of Service
Posted on May 30, 2011 by Elaine

It seems fitting on Memorial Day that I write a memorial of my own.

My 84-year-old neighbor and friend Halina Kiesig died this past week in her assisted living home. Among a host of other problems, she suffered from congestive heart failure, making it increasingly harder to breathe as her lungs filled with fluid. The last time I saw her alive, she was struggling for air, in spite of oxygen tubes tied to her nose. She was a woman slowly drowning.

My husband Ted and I befriended Halina about two years ago. She lived in our apartment complex and, except for her slow daily walks around town–her hands holding tight to a Trader Joe’s shopping cart for support–she was essentially a recluse. She couldn’t drive. She couldn’t see. She could barely hear.

We knew only a little about Halina. She was originally from Poland, and had no living family, no known friends. When she was a little girl, the Nazis arrested her father and he died in a concentration camp. Her mother was a pediatrician. In her teen years, Halina was a knock-out. Her friends called her a Polish version of Elizabeth Taylor–and she was: I saw a black-and-white portrait on her bureau that proved it. She had true love once, but it wasn’t returned, and instead she married a ship captain named John. She told John straight up she didn’t love him, but he promised to love her enough for the both of them. They moved to the States to start a life together, and John shipped out to sea for months at a time. Halina lived a reasonably affluent but lonely life until they divorced. They had one child together – a daughter – but she died early on of cancer. Halina never talked about it much.

Ted and I aimed to be good neighbors to Halina – changing her light bulb when she needed it, fixing her TV, picking up a few groceries for her at stores out of walking distance. We invited her over for a Christmas brunch, and checked up on her every few days to make sure she was okay. It was clear her health was fast declining. Soon she needed our help going to the doctors and managing the confusion it is to navigate the health system. The more time went on, the more she needed from us.

I felt compelled to help Halina, but at the same time, I didn’t want to get too involved. Truth be told, I didn’t always like her very much. She was feisty and held a grudge. She gossiped about all the neighbors, and at times, was as toxic as the black grime built up on her rugs. One minute she was sweet and loving – so grateful for all I was doing for her. But then she would turn on me, spewing daggers into all my soft parts. Her confusion and anger wore on me, and many times, I left her presence feeling just plain bad.

Still, she was someone who needed help, and she had no one – I mean no one. So out of service and necessity, I showed up.

Less than a week before our wedding last October, she called and said she was dying. She could hardly walk – dizzy spells – and had been sick for days. I took her to Stanford Hospital emergency room, and this was the beginning of the end for Halina. The next few months she was in and out of the ICU and skilled nursing centers. She had no supplemental insurance to her Medicare, so there was a small financial crisis as well. I was on the phone with her insurance, her pension fund, her pharmacy. She couldn’t go home to her second-story apartment – and I was the one to tell her. It wasn’t easy – I can’t imagine it ever is in this situation – but after a battle, she finally she agreed to move into assisted living.

I thought this would have a happy ending here. I pictured Halina playing bingo and eating turkey and mashed potatoes with the other residents. Not so. Things got worse. She hated her new home and refused to leave her room. She hated the caretakers, she hated her apartment, and she said the food was crap. Most of the time, she hated me too.

This was incredibly difficult to deal with. I knew it had nothing to do with me, but I had a terrible time not taking it personally. For my sanity, and with a lot of guilt, I distanced myself and let the system take over.

About a month and a half ago, Halina went into hospice. Ironically, the sicker she got, the nicer she became. Or maybe she just didn’t have the energy for anger anymore. I started visiting her again, and our friendship recovered. One endearing memory I have is of her all perked up in her hospice bed when I brought her favorite meal. She had told me she was starving and begged me to get her a 20-pack of Safeway Teriyaki Chicken Wings. I never saw someone so delighted to dig into chicken wings.

With time, she could no longer sit up in bed, and would just lie there, in and out of restlessness. Then she stopped talking, and would just make these gurgling groaning sounds. Often I would just go and touch my hand to her forehead, or hold her tiny swollen hand. It was powerful there, in the presence of such suffering.

When I showed up to visit her this past week, she had been dead for two hours. The coroner was there – he had a clipboard and was wearing suspenders. They had already packed up Halina in a zipped bag and put her body in the back of a van. I touched her head, through the body bag, one more time.

Why am I sharing all this? Well…partly because Halina died and no one knows it. Other than me and Ted, a couple of care workers and a few friends. There’s no service, no memorial. Halina’s ashes will be tossed to sea by some hired company who takes care of that sort of thing. This is my way of remembering Halina, and letting people know that she lived, and that, in spite of my mixed feelings about her, I did love her.

The other reason is this: There’s a shadow side of service, and this took me by surprise. I had always placed the idea of serving others on a pedestal. I mean, an opportunity presents itself to serve…you have a neighbor in need…and you better darn side do your duty, right? In a culture where we hardly know our neighbors much less love them, this still seems pretty basic. But I found the intention behind service is what matters. I can see now, in the beginning I helped Halina because I (or should I say my ego) wanted to be good. And by all eyes including my own, I was good. But I didn’t feel good. Frankly, a lot of the time I felt pissed and resentful. It wasn’t until I let go of being good that this resentment faded, and I could get real with myself and Halina.

I also learned that if you’re doing something for someone because you feel sorry for them, it just plain doesn’t work. It was only until I got to the point that I didn’t feel bad for Halina – that I actually just accepted where she was at without any judgment, good or bad – that we could really relate to each other as people, as friends. Halina wouldn’t have it any other way. I now think she suspected I was there because I felt sorry for her being sick and all alone, and she pushed me away because of it. In this way, Halina was a great teacher to me. And someone I won’t soon forget.

So next time you’re called to serve something…or someone…ask yourself these questions:

1) What am I getting out of this – really? What need(s) is it meeting in my life?

2) What (if anything) am I sacrificing on the altar of service?

3) Beyond my role, how does it feel when I’m doing this service?

4) What boundaries can I set around this service?

5) What is my exit plan? At what point would I be willing to walk away?

What are your thoughts on this? Any stories you have of a time you acted out of service…only to learn some important lessons along the way? Please share your comments – I’d love to hear from you.