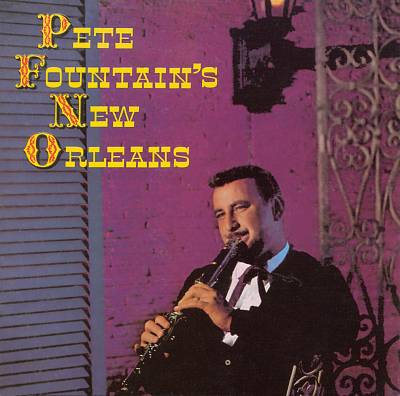 I came across a book that I hadn’t seen before called, Groove Interrupted: Loss, Renewal, and the Music of New Orleans by Keith Spera.  Chapter 11 begins with the author’s encounter with this famous cousin.  Reading this confirmed there are still plenty of nuts on my tree, so I thought I’d share a bit!

“In 2000, I encountered Pete Fountain and his good-humored, long-suffering wife, Beverly, in a Biloxi, Mississippi casino following a performance by comedian, Don Rickles.  The famed clarinetist had recently celebrated his seventieth birthday.  Apropos of nothing, he offered to show me his new tattoo.  Beverly rolled her eyes as her husband unbuttoned his shirt to reveal an owl pulling a snake out of his belly button.

An owl.  Pulling a snake.  Out of his belly button.

Beverly shook her head as Pete stood amid the slot machines and retirees, grinning broadly.  He said the tattoo had something to do with Native American culture.  A more likely explanation is that the notion of getting inked with such a grand design at his age appealed to his still-mischievous sense of fun.  That’s all the reason he needed.

Ten years later, I joined hundreds of well-wishers for Fountain’s eightieth birthday bash at Rock ‘n’ Bowl, a combination bowling alley/music venue/shrine to New Orleans nostalgia.  He had endured some hard years in the interim, thanks to Katrina and assorted physical ailments.  He lost significant weight; the owl tattoo likely flew a little lower on his downsized belly.

But surrounded by family, friends and fans at Rock ‘n’ Bowl, his eyes still twinkled.  He bent down to kiss my four-month-old son, Sam, on the head.  One day I’ll tell Sam about the time he received a blessing from the merry pope of New Orleans.”

Thanks, Mr. Spera, for the vivid memory you shared.  (If you would like more information on his book, you can find a link here.)